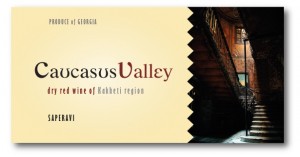 We recently designed two labels for The UK drinks distributor Marussia, for a Georgian wine made from grapes grown in the foothills of the Caucasus Mountains, in the former Soviet Union.

Bordered by Russia in the north and Turkey, Armenia and Azerbaijan in the south, Georgian wine is famous throughout Eastern Europe and is now finding favour further west.

Unfortunately the labels that were approved weren’t ours – they’re shown above. You’ll have to wait until the wine is available here later this year, to see which version you prefer…