Furniture advertising and design is what we do. Likewise location and studio shoots, large scale office furniture, kitchen and bathroom sets. One off product shots. Brochure design and printing. IWP love it all.

We’ve planned, designed and produced all of the above, for clients large, small – and startups. Always cost effective, certainly coming up with creative solutions to budget/timing constraints, we love making our clients job look the business.

From original design, planning and production of brochures and online, to managing thousands of price changes, we take it all in our stride – above all, we manage it without any fuss. Consequently we seem to enjoy repeat business as a result.

Talk to us about your next project or even idea – you’ll find we’re not just part of the furniture.

Over the years we turned Brocklehurst’s of Bakewell from a provincial sporting goods shop to a highly respected six figure business with mail order and online shopping.

We significantly upgraded the photography and design along the way, shooting in locations up and down the country, including the beautiful Chatsworth in Derbyshire.

Using a mix of models and real sportsmen added to the authenticity.
We photographed on Grouse moors, country estates and some of the most characterful locations in England.

No birds, animals or bank balances were hurt on our shoots…

Came across this ad from our archive recently.

Former Manchester United captain Roy Keane famously criticised the prawn sandwich brigade at Old Trafford back in 2000. Just so happened that the prawns in question came from our client, Royal Greenland.

So faster than a Ryan Giggs volley we served up a quick food service ad on the back of the story. Off we went to Old Trafford where the catering team prepared what was admittedly a fairly exotic sandwich for the shoot. Client loved the ad, distributor enquiries peaked, and the art director (me) got the sandwich. Result! 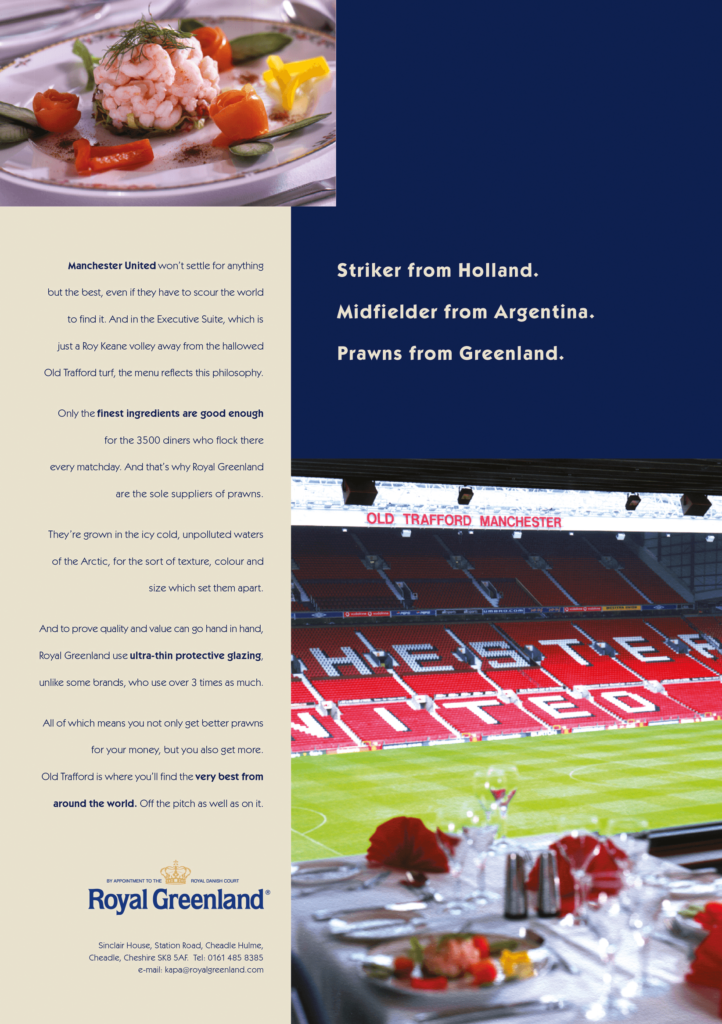 In Gin Label Design, good things come in small packages. Certainly true for the unique & sublime 5cl Hunters Cheshire Gin miniature. Along with the 20cl, 70cl and 1l bottles, plus a 1l optic version the set is complete.

Hunters Cheshire Gin is made to a 300 year old recipe, and features apples from historic Norton Priory Garden’s ancient orchard in leafy Cheshire. A clever fusion of the highest quality botanicals available and export strength alcohol… 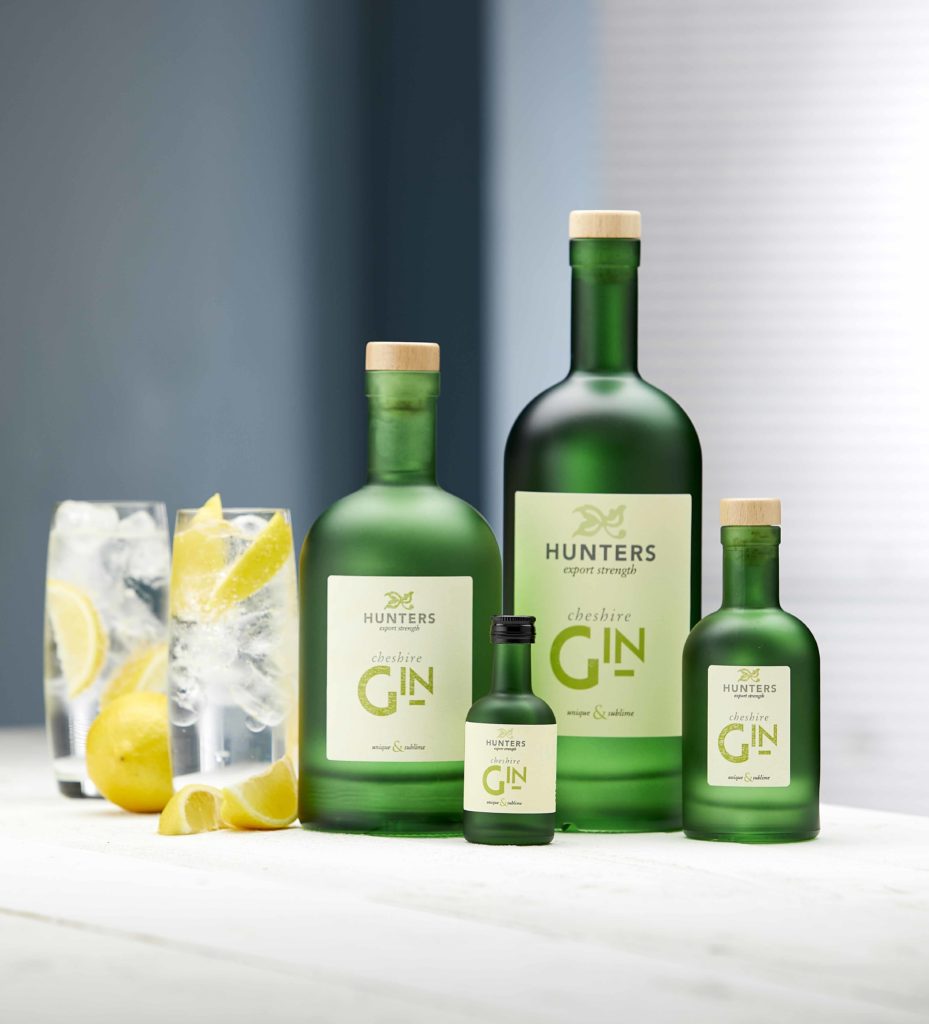 Original Montgomery is the oldest surviving company and was chosen by the British Admiralty in the early 1890`s to make the first duffle coats. The duffle was designed to keep out the worst of weather whilst not restricting the movement of sailors.

They were made Initially For the Royal Navy but were ‘traded’ between officers from the Army and later the Royal Flying Corps. As a result by WWll the duffles were made for all allied services.

The first raiders behind enemy lines, the long range desert group later to become the SAS, used duffles as cover for the cold nights and seat cushions for the days travelling many hundreds of miles across the deserts of North Africa.

Now adopted by hipsters from Hoxton to Harrogate, and pretty much following the original design, the classic lives on… 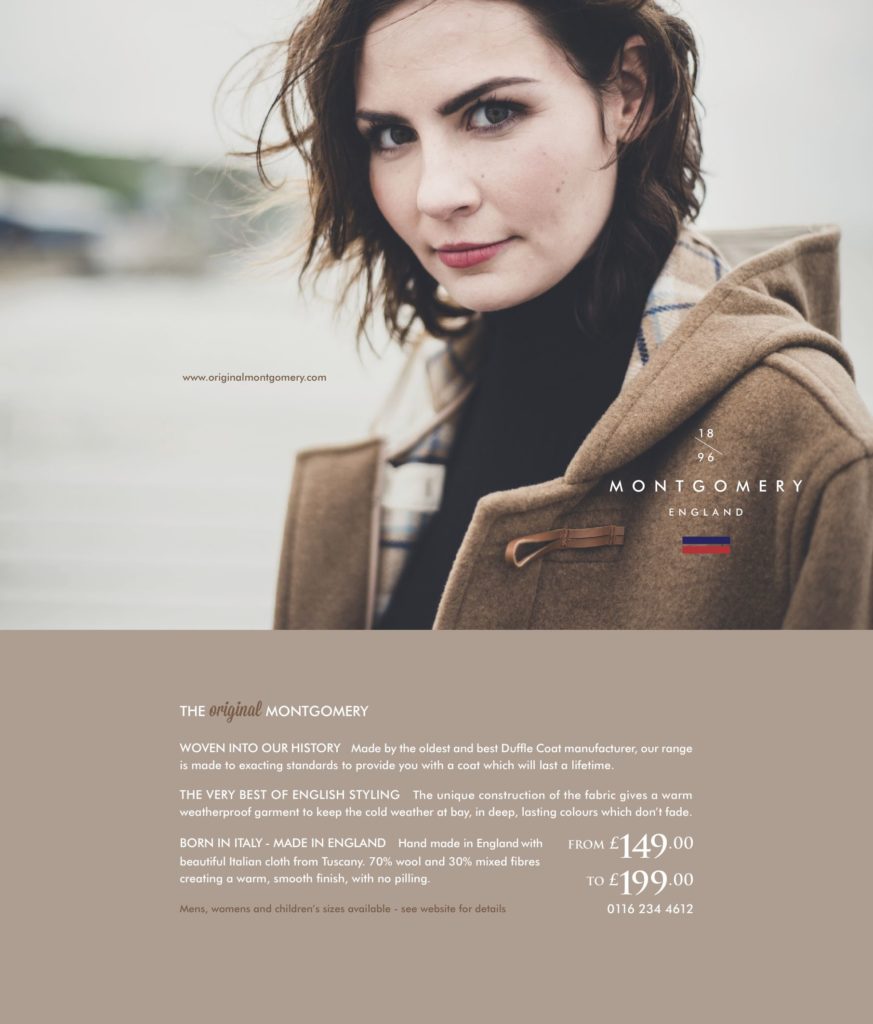 Here’s the latest beer design work for The Mobberley Brewhouse. This one is a collaboration with hop merchant Charles Faram. New varieties of hops are constantly being developed by the grower, increasing the options for ever more creative brewing.

In today’s graphically dizzying display on the beer shelves, this white can range really stands out. We love the simplicity and classic type, plus the lovely line illustration…

This one features English only hops – an attempt to produce one of their typically juicy progressive IPA’s, and put the spotlight on English hop varieties. Olicana, Jester, Godiva and the imaginatively named CF160. Don’t know about that – but at an impressive 6.5% ABV we do know it tastes marvellous…

Just Roll With It..! 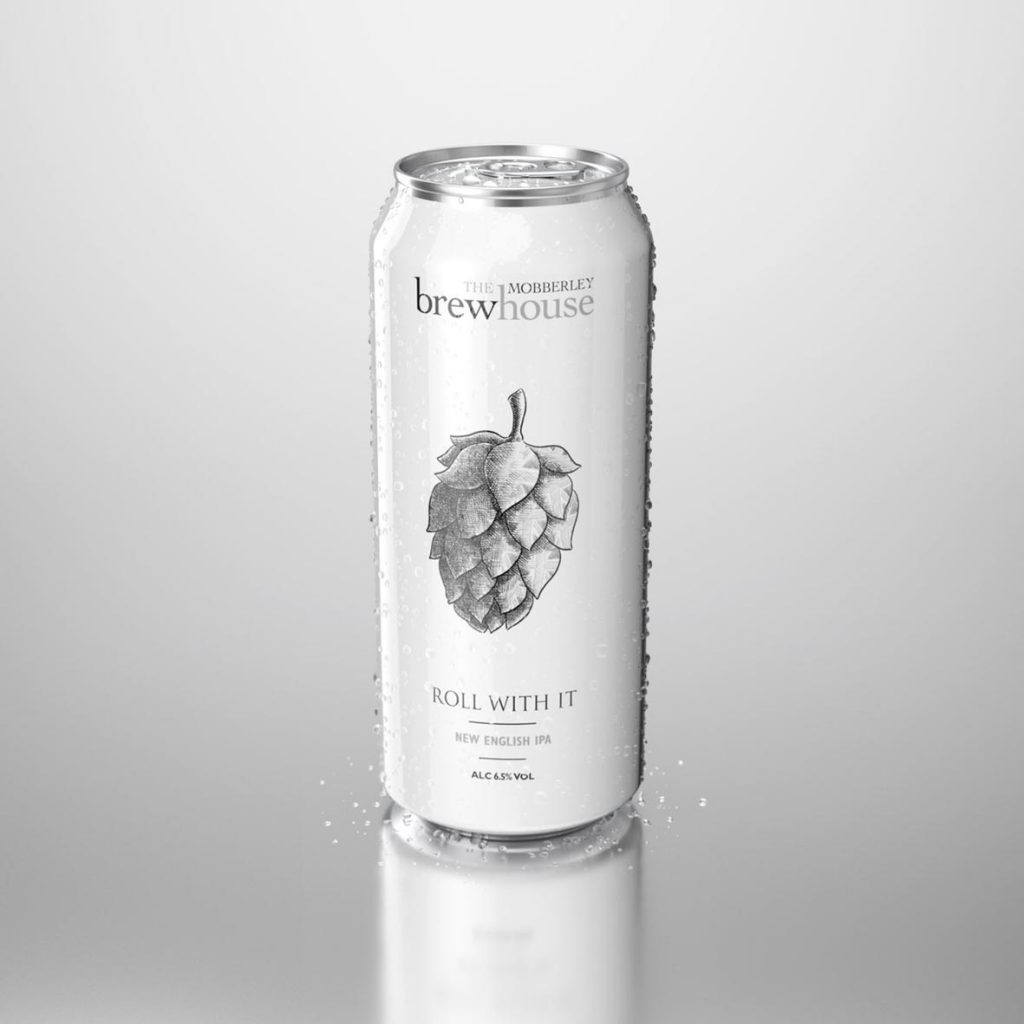 What the can says:

GROWER OWNED, HOP MERCHANTS FOR MORE THAN 150 YEARS, CHARLES FARAM SOURCE HOPS FROM AROUND THE WORLD, OFFERING BREWERS BOUNDLESS CHOICE AND FLEXIBILITY WITH EVERY BEER THEY MAKE. THEIR OWN HOP BREEDING PROGRAMME CONTINUES TO INCREASE OUR OPTIONS; WITH NEW VARIETIES OF PROGRESSIVE, ENGLISH HOPS BEING REGULARLY RELEASED.

WE USUALLY FOCUS HEAVILY ON AMERICAN VARIETIES, SO THE CHARLES FARAM TEAM AND OURSELVES THOUGHT IT A GREAT IDEA TO PUT SOME OF ENGLANDS FINEST TO THE TEST – AN ATTEMPT TO PRODUCE ONE OF OUR TYPICAL JUICY IPA’S, WITH ENGLISH ONLY HOPS.

Just had photography done recently for our lovely friends at The Mobberley Brewhouse. Such a lovely part of our beer design work we thought we’d share. It’s a small batch exclusive – a very drinkable New England Session IPA at 4.4% abv, with juicy hop flavours from Citra and Mosaic hops.

You can see more of our design work for TMB here: http://mobberleybrewhouse.co.uk

The Mobberley Brewhouse specialises in dangerously good beer, from delicately brewed session beers, to outrageous modern craft beers. They all leave the brewery crammed full of unique flavour. Obsessed with improvement, it is their constant aim to produce the best and most consistent beer possible.

Having sampled pretty much all of their extensive range (in the line of duty of course), we can only agree. 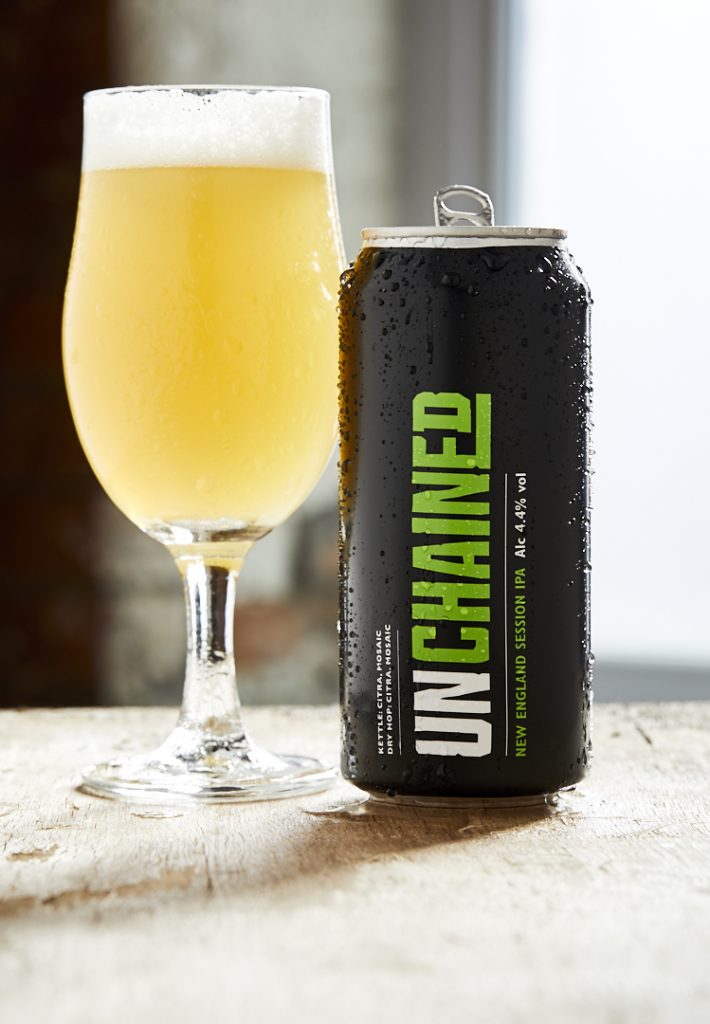 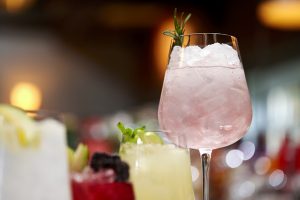 Probably the first gin cocktail invented was a simple mix of gin and Angostura Bitters. Credited to the captain and surgeon of the HMS Hercules in the early 1800s, while patrolling the Caribbean (no wonder they kept getting lost). Then followed the still-popular Pimms in the middle of the 19th century. This time period also saw Gin first mixed with lime, as a way to help combat the threat of scurvy in sailors.

In 1874, the first Tom Collins was served in London, still a popular item in any London cocktail bar – soon followed by the dry martini. Early in the 1900s saw the first Singapore Sling and the Negroni – those old fashioned gin cocktails have truly stood the test of time…

We recently did a shoot for our delightful client (of course ALL clients are delightful – no?), Hunter’s Cheshire gin.

Hunters is a premium gin placed among the top division of world-renowned gins.

Careful who you mix with…

Created by Hunter’s talented mixologist Louis, the Hunter’s cocktails were designed to deliver the special taste of their gin. It’s a single batch distillation from a 300 year old recipe.

And no, the Art Director didn’t get to drink them (that’s what HE said)…

We love to design for our beer clients – they allow us free reign to do what we do best. Like creative label design for The Mobberley Brewhouse.

A type for every face

Fonts are so important in branding – and the brief from the client was for strong colours. So we put our best faces forward and went for it. 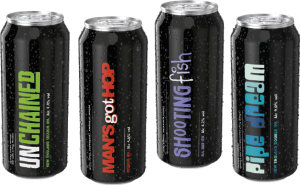 The four here are the latest in an ever-increasing range of critically acclaimed beers from this small but perfectly formed independent Cheshire brewery… We say small, but watch this space for news of their exciting expansion plans.

Getting creative means loosening up after the strict constraints of some of our other food labelling clients. Mobberley likes us best when we throw out the rule book and play with the can designs, colours and especially the fonts. Mixing typefaces, upper and lower cases, bouncing letters off the baseline – nothing is off the menu as long as it has standout.

The competition on the shelf today is dizzying. With more and more products shouting “Look at me”. Which is why we went for a clean, uncluttered look, with solid colour blocks and a single beer name to draw the eye.

Those clever people at The Mobberley Brewhouse love getting in on the act too. Anyone can have a good idea, and we’re not precious when the client comes up with one. We’re lucky to have creative talent on the client side – and all the beer names here come from them. It’s then over to us to crank up the type machine and get jiggy with the label design.

Brand design is always challenging and at IWP we love a challenge. But being allowed a free hand with the creative (plus getting to sample the product on occasion) makes for a happy client/agency relationship – with excellent sell-through to prove the point.

This same attention to detail is available to anyone looking to create a brand, refresh or advertise an existing product or service. After all, standout products deserve standout design… Check us out on https://www.iwp.co.uk/work/drinks/mobberley-brewhouse

And no, the phone didn’t go dead. Instead we rolled up our sleeves, stocked up on Lavazza and set to work. Many (many) hours – and several billion clicks of the mouse later, we had a rather attractive perfect bound 140 page brochure the client was delighted about.

“This has really raised our game” said Centric Director, Phil Sloan. “IWP made the whole project straightforward – I was able to leave it to them and get on with my work”.

We pride ourselves on attention to detail – and with every item having price, dimension and colour information, balancing important detail and especially user convenience was the order of the day (and yes – a liberal helping of style).

Have need of an attractively designed, carefully produced brochure of any size? Call IWP. We’ll get the coffee. 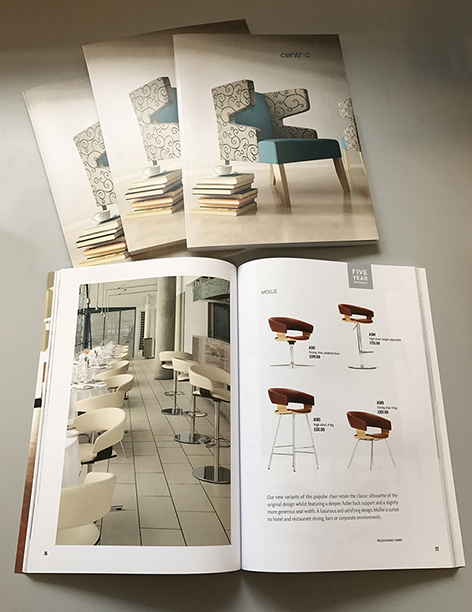